The user can download iPhone BHIM app from Apple App store. You can search “BHIM National Payments Corporation of India” in Apple store.

BHIM app, or the Bharat Interface for Money, is the Narendra Modi government’s latest app to push India towards a cashless. Today at Talkatora stadium PM Modi has launched BHIM app, which is available for Android OS.

According to the government, the BHIM app allows the users to make cashless payments using their mobile phones. An iOS (Apple) app will be launched soon.

You can set your UPI PIN by going to Main Menu -Bank Accounts -Set UPI-PIN for the selected account. You will be prompted to enter the last 6 digits of your Debit/ATM card along with the expiry date. You will then receive an OTP which you will enter and set your UPI PIN. Note – ‘UPI-PIN is not the same as MPIN provided by your bank for mobile banking’. 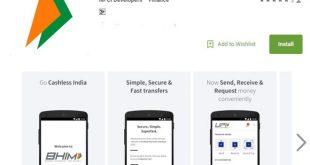