TRAI has introduced network capacity fee (NCF), which is applicable from 29th December 2019. The consumer has to mandatory choose “Basic Service Tier Pack” launched by TRAI. In this 100 free to air (FTA) TV channels are included in the Basic Service Tier with minimum monthly recharge of Rs 130 +GST (18%).

Taking FTA channels is the choice of subscriber but not mandatory except the mandatory channels of MIB. If Subscriber chooses pay channels, applicable MRP is payable in addition to the network capacity fee.

AS PER GOVERNMENT MANDATE A NEW TARIFF REGIME WILL COME INTO EFFECT FROM 29th DECEMBER 2018 (Network Capacity Fee) Just Pay Rs. 130 /- & Get a Bouquet of 100 FTA Channels

What is Network Capacity Fee

The TRAI Network Capacity Fee’ means the amount, excluding taxes, payable by a subscriber to the Distributor of television channels for distribution of TV channels subscribed by that subscriber and it does not include subscription fee for pay channel or bouquet of pay channels, as the case may be. It is a kind of monthly fixed charge for a service. TRAI has prescribed a ceiling of Rs. 130/- per month for
use of network capacity of a distributor for providing 100 channels to a subscriber.

Annual subscription charges are paid by a subscriber in advance?

In case a subscriber has availed any scheme with advance charges paid for future lock-in period like an annual plan the distributor shall continue to provide services for such committed period without any increase in price/charges and without altering the other terms of subscription.

The distributors cannot make any changes that entail any disadvantage to the subscriber in such cases. 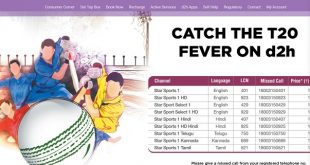 Videocon d2h has merged with Dish TV in March 2018. Videocon D2h and DishTV is …